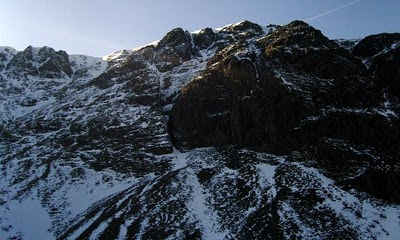 Well it's been a while. Some good reasons for that: work, big party to organise, enjoy and then recover from and i was a naughty boy and got distracted by Winter.

On the downside i certainly lost a bit of psyche and have had sore elbows. I had reached my boredom threshold with circuits at Cockermouth but rather than cracking on with the strength phase i couldn't seem to get started.
Me on 1st pitch 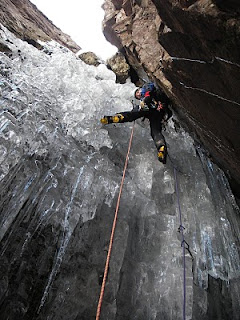 Winter lost me 2 days training last week but good, hard, walk ins and my obligatory run from Great End summit to Seathwaite in 4 season boots + full kit helped the fat loss. Down to 17.4% last week ( edit:now up to 19% again ?????). A great day out helping a mate with his Winter skills before his ML(W) assessment on a positively Alpine feeling day out and Dove Crag Gully in the bag were worth it i reckon.
What an awesome route and i have to say it was worth missing a bouldering session for. The first pitch was mad with a brutal wake up call of overhanging ice. Relief comes in the form of the other gully wall which enables you to bridge out so your feet are on the ice and back on the rock. You can then climb at your leisure to the crux chockstone. The big ice pitch was, well, big and icy i guess. I learnt not to undo your shoelaces with a crampon point causing your boot to nearly fall off on this pitch. Luckily i was seconding :0)

Is the place to go for common complaints in this dept. The exercises have sorted the niggles out super quick - but i have also been avoiding the woody as that seemed to aggravate it.

The weather and work are not letting me get on rock at the moment. I really feel as though i'm not firing and i think i need to get on rock to bring everything together. Neil Gresham has written something about getting it together at the start of a season. I'll have a search and post it if i find it. I feel as if i am on empty all the time. I've been tired of late and that combined with changing from str end work to hypertrophy and trying to diet may have been too much. I was considering giving up and changing tactics but a quick re-read of Dave Mac's book says not to give up on things quick before you give them a proper try.

I felt the same all week - a poor ARC session and a poor boulder session at Keswick only added to my misery but i managed to get out to Penrith wall last night. I wasn't expecting much as i was still feeling tired and i had my kids in tow. It started badly as i couldn't get any kind of flow on the warm up routes. I didn't fail on any of them but i was constantly wrong handed and swapping feet. On the plus side my weakness used to be steep routes. I creamed a 6a+, 6b+ and a 6c towards the end of the night. I even helped my daughter with some numeracy work, she was trying to work out what two bottles of ribena would cost if one was £1.40, while climbing; much to everyone's amusement.

I am hoping i have now blasted through the transition period and i can crack on this week. I certainly feel recovered this morning. However the weather and working all weekend mean it will probably be another week on plastic.
Posted by Biscuit at 13:43 No comments:

A measure of progress 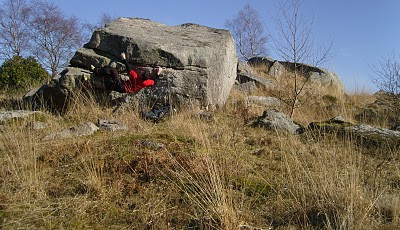 The Ring of Fire

Decided after yesterdays washout that due to incredibly good weather i should reward myself with a sneaked couple of hours at Eskdale bouders instead of DIY. Decision made i grabbed my kit and was in the car in minutes. I then turned round after a few minutes as i had no shoes - or mat. More haste...

I've not been since 21st of Jan so i was keen to see how i was going to get on. I was actually a bit nervous as to whether those few weeks of grind have been worth it.

I started badly with a few warm up problems, not much oomph in the arms it would seem, but cracked them all off in the end. I also did the traverse of the diamond starting from the bottom left. No real difficulties on it (5) but a really nice 'just highball enough' problem. If that sequence was to be found half way up a crag it'd be a 3* route.

The main point of the session was to see how my fitness was on a pumpy traverse called the Lipster. It goes at V4 and when i did it in Jan it took a few goes and had me pumped out to the max. With a quick check of the sequence i dropped into the sit start and ploughed through it in one. I got to the end and could have gone round again. No pump but a little struggle pulling through the crux move round the corner.

Good news: Real progress has been made in my strength endurance

Bad news: I haven't managed my strength well enough and have definitely lost some

Good news: I've got a strength phase starting next week

It's almost as if i have a plan.

I picked up a new project for the medium to long term. The Ring of Fire an awesome 7A traverse ( but feels WAY harder to me ) all the way round a block. It's strong, technical, pumpy and i am no-where near doing it. I reckon if i can get fit/strong enough to do that then 7b routes will start falling - he says before he's even done a 7a.

Decided on The Arete at Bees as my other project - 7A too but much more of a pure strength and finger test.

...especially if he can't read a tide timetable.

Nipped down to St Bee's South again for a re-rematch ( no not a typo ) with Bottomless arete and Red Whale extension - 6B+ and 6C. I'd clocked a tide timetable the day before whilst out and about in Whitehaven. High tide 7.30 ish it said. Sounds good i said. Still looks a bit high to me i said at 10. Must be on it's way out though i said. Is it bollocks i said at 11.15 and got bloody wet getting out.


I'd only spent 15 mins on Bottomless Arete after warming up on the nearby easier problems on the wall. In that time the tide wooshed in and nearly cut me off - i had to go in up to my knees in roaring foam standing on a rock platform covered in green slime with a boulder mat and sack on my back. 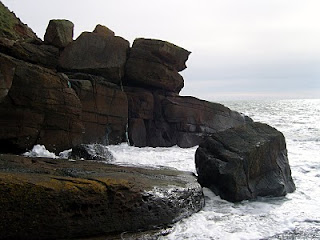 The exit rope !
Anyway i got BA after that 15 mins and i was getting madder and madder with it. You'd never normally find me losing my rag with a piece of rock ( or beating one with a rag ) and certainly not shouting when i'm the only one there, but maybe i need to. Felt easy when i finally got it.

Hardest V3 in the world ?

Red Whale boulder was floating off towards the IOM so it was back up the big rope and home with my tail between my legs.

Anyway one STG ticked off.

As for the most important goal of the moment, fat loss, i've lost 3% body fat this week. How ? You may ask. By checking my stats inputted and realising my conversion skills from imperial to metric are about as good as my tide timetable reading skills. This resulted in an extra 5cm in height and a new body fat of 19%. Sometimes life is good :0)
Posted by Biscuit at 13:30 No comments: