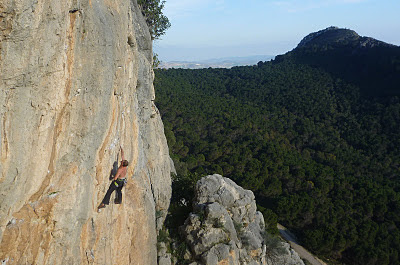 Andy T on Rock the Kasbah 7b
Shocked to see it's been nearly 2 mths since i last posted. Xmas seems to have got in the way as has life in general. I don't seem to have the time to sit and type of an evening. Mrs Biscuit has flown back to the UK for a week so i have now got the time for an update. It does mean she has the Mac with all the piccies on it though so i've not much to brighten this blog up.

Mario did come over and we were cut off in our prime after a quick RP of Diedro Candela, a stamina 7a+. The idea then was to tick off another 2 or 3 in the last few days he was here. Instead we got the virulent shits ( think going to the loo 40+ times a day and not eating for 3 days ) and i wasn't even well enough to drive him to the airport. Respect due to the Maz with his kill or cure approach using a Whopper meal to kill the bugs. Braver than i am to do that 1 hr before getting on a Ryanair with only 1 toilet.

In my last post i said i had learned a lot about redpointing and onsighting. This seems to be true and i am forming a definite routine in how i approach both. So far my redpointing has only been up to 7a+ and haven't been sieges. It's been more looking at the moves i don't have the fitness to hang around and execute onsight and then the route goes next go. 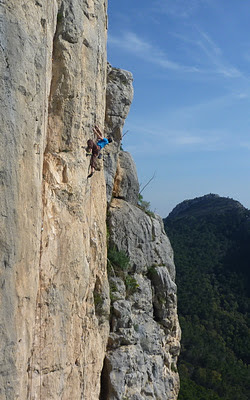 I blogged a while ago about trying Arabesque, an 3 star 7a, and how it was all technical and balancy and not my thing, along with various other crap excuses. I got back on it yesterday, had a bolt to bolt to remember it and figure it out, and then did it next go. It felt pretty standard to be honest and i was certainly no where near my limit physically. I'd been having a chat with someone earlier in the day about the mental side of things. Andy climbs 'a muerte' every time and is super psyched. He's great to climb with because of that and it rubs off on you. I think i've only just started to realise how much the mental side has been holding me back.

I've always known that i don't like falling but since moving here i've gone from abject panic at the thought of falling above a bolt to a kind of ' I really don't want to fall but the desire for the route outweighs the fear.' This is a massive improvement but it's still there, especially on onsights and it needs to be squashed down further until it warns me of danger but otherwise shuts up.

Seeing Andy take more falls in a session than i do in a year shows me what i need to do and i have now started climbing with the knowledge i may fall and i have fallen. Guess what ? Nothing really happened.

Although i am going to really work on the mental game i have also started a 16 week periodised training schedule. Lots of reading has been done and it's a full on aero cap, an cap, aero pow, an pow thing. After week 1 i am tired. Not great as it's supposed to be a very easy breaking in week. Oops ! I will post full details of it soon so you can get an idea of what i've done. So far i've only planned the first 8 weeks, which is my base. I have the next 8 weeks ( peak ) rough planned but no detail yet. It'll be really interesting to see what effect it has.

My goals are now different - again. They have been chaning as logistics change and as i come across more appealing routes. No bad thing and they will all stretch me. I want 7b by the end of this 16 weeks. I have been really impressed by routes like Anack Sunamun at sector La Momia in Chorro. Next to it is this years big challenge: Honk Down ! a looong 7c. Think long 7b to a jug rest and a few moves into a V4 that's easier for the tall. It's a gut wrencher as if you fluff the crux you've got to climb another 30 metres to get to the crux again. I am actually looking forward to it.

As for the 7a onsight goal. That's still very much there and a word from the wise ( John Kettle climbing coach ) means i can fit both in by trying 7a onsights as part of a warm up for routes in the 7b region.

Bring it on ! I'm going to put a stamp on the pea and crush it. Sorry private joke.
Posted by Biscuit at 12:10 No comments: