Last Tuesday was officially the 2nd day out of the climbing season after last week's outing in Marbella.

The bad news is i didn't do well. The good news is i remembered my camera this time.

I went off to El Chorro with Luis to meet up with Andy Tapper. You can keep up with his adventures here:

What we weren't expecting were temperatures probably up into the 30's. I had a fleece, long sleeve thermal, short sleeve top and long trousers on,. Wooly hat in my bag along with gloves and a belay jacket. I also had a pair of shorts tucked away in there. By the time we reached Poema de Roca cave it was roasting. and i was down to t-shirt and shorts. Apologies to everyone who had to witness the legs. It's fair to say the weather has been a bit high or low of late.

The day started well with Tapper throwing a rock down on top of me from his project route, Via de Rudolf ( 8a+). I am guessing he's picked this because it's Christmassy. Quite an interesting discussion ensued where Patrick asked me why i didn't look up to see where the rock was and dodge out of the way. Being an experienced mountaineer i recognised the difference between " below " and " BELOW " screamed like a teenager at a Justin Bieber concert. Sorry Andy but it was quite high pitched. Anyway, the scream told me that whatever was coming wasn't your usual " Oops i've kicked a small pebble off the edge of a ledge " and it was heading towards us. I didn't have time to look up without risking a rock into my beautiful face. I put my arms over my head, stood still and stood straight. This minimises the target area for the falling projectile and makes you look cool as if you're all James Dean staring death in the face as you sneer with contempt. The rock smashed down a couple of feet to my left and was pretty big. It was certainly big enough to put a dent in my day and my head.OK in reality it was enough to kill me for sure. Was i wearing a helmet whilst sport climbing in my own time. Of course i....wasn't. Personal decisions, personal acceptable levels of risk. Closest i've come to getting whacked whilst climbing outside the Alps.

Not Andy's fault. It was the one good hold in the crux and was well used/chalked. Maybe all the recent rain had got behind it and weakened it,

Do i always wear a helmet when instructing and tell people that they should too? Yes i do. Time for an attitude adjustment ? I don't know. I doubt i would have been wearing a helmet whilst walking around a long way from the crag bottom anyway so who knows. I may well be more wary of caves from now on though.

On with the climbing though. Luis and i started off with two of the most god awful routes i think i have ever climbed. Don't EVER do the the 6b and 6c to the right of the cave. Mystifyingly flowstone with the consistency of coral or glass depending on what hold you tried. In order to keep things anywhere near the grade massive detours were needed around the bolts leading to potential swings across the razor sharp coral. You can bet your ass you wouldn't land on the polished stuff.


By this time the cave was like an oven and we scooted into the back to look for something in the shade. I spied a 7b that was short and powerful. I was feeling OK about it until i saw the last few metres of the powerful included a horizontal roof. Scuttling away from potential failure on a roof that i should have been able to do i randomly ended up on Swimming Through a Shark Attack, a classic 8a+. The attraction was that it had fixed draws in it and is a pretty much horizontal roof route. No problems if we can't do it, just pull the rope and find something to blame apart from yourself. Simples ! The repulsion was that by the time i got to the 4th bolt i was shitting myself due to the very poor state of the bolts. Coke can ring pull thin hangers, old style bolts that you can move around in the drill hole by hand. Brilliant ! It's worth noting that there are now new bolts next to the old ones, but the fixed gear is in the old ones.

Tappa declared himself fearless and decided to give it a go. He soon discovered his fear and we started to look for something else.

Local knowledge prevailed and Luis pointed us in the direction of the un-promising looking cave directly to the left of Poema that was in the shade. Hooray !

Unfortunately the only route in there was a 7b+ roof climb. AAAARGH ! Fortunately even i have to admit it was pretty damn good, though it doesn't look it. Low bolts to protect the belayer ( you have to scramble about 10 metres up into the cave to start ) and no hard moves. However there were a lot of them and they were disturbingly steep. A steady vertical start led to a hands off rest, braced against a massive Kalymnos stylee tufa, and then you're off into overhanging land. Take a look at the draws on Andy's harness to see how steep it was.


After a first go on lead the old enemy of shitting myself came racing back. I was fine last week but the feeling of falling backwards onto a load of slack just makes my tummy go all rollercoaster. This meant i was hesitant and slow. Not what you need when the endurance clock is ticking. 2/3rds of the way up i flopped on a bolt rather than plough on and see what may be possible.I did pluck up the courage to make the moves that were scaring me though. A reach up to 2 tufa 'stubs' and undercut them to make the clip.

Luis showed the way and got the draws in. Tappa had another go but still peeled off after an amazing display of grit and tenacity just before the finish. I retreated to top rope ( I know, I know ) and was hopeful of blasting through to the finish with this crutch. This time i got through the crux and then failed again just after taking a whopping swing. I pulled/cheated my way up and lowered off with my tail between my legs.

Well the fear has come back, but only on really steep routes. That's half good and half bad. I love the look of these routes but they intimidate the shit out of me.

Next time out, fall practice. 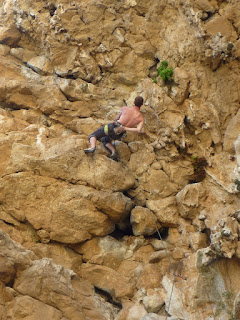 Lifestyles of the rich and the famous - climbing in Marbella.

After nearly 2 months of seriously crap weather it looks like we're in for a prolonged dry spell. It's been freezing with Northerly winds driven in by two weather systems sat to the West and East of Spain sucking the cold, wet winds down onto us here in the South. Although it wasn't as bad as in the USA there was severe flash flooding with the dead totalling 16. Villanuevas del Rosario and Trabuco, just 20 mins from our house, were totally devastated but fortunately for us our village didn't flood:

A few weeks later it was the turn of the centre of Malaga to get it. Despite purpose built flash flood channels for the river there was just too much water falling onto already sodden ground. That along with 3 water spouts meant the centre flooded. Most of the parking in Malaga is underground and over 300 cars were trashed when they flooded under department stores.

On with better news though. Finally getting back out again has been great. After a long stint at work i met up with Silvi to go to a new climbing area situated just outside the millionaire's playground of Marbella. I had been togged up in Winter salopettes and my biggest duvet jacket for the last week at work - it had been freezing - but Silvi promised me sun and warmth and it was a lovely day in the low 20's. Perfect for climbing. I want to get on with some 7b's and 7b+'s but with a new crag to play at i wasn't going to hang around on one route all day.

Most of the development has taken place in the last 3 yrs and a guidebook has been produced a few months ago. It's always a great feeling to go to a new area, see new crags and get some totally new routes under your belt. The guidebook is one of the best i've seen for a local effort. Very clear access info, excellent full colour photo topos, graded well on the whole and in Spanish and ( well translated ) English.

We went to the El Grito and El Gato Negro areas, which are really just a single buttress shaped around a corner. The crag can be seen from the parking and looks quite striking with a beautiful vivid orange colour. It soon transpired that the routes were about 20m long but the first 5 metres were very slabby and the top 5 metres were very sharp and slabby/vertical. This still left 10m of beautiful flowing climbing in the middle. We didn't do a bad route all day. It did however highlight a weakness ( literally ) i've been ignoring for a while. I am quite weak. I've not done any strength training in a year. So a 6c+ was effectively a 10 metre 6c+ due to the easy ground around the middle section. Some bouldery moves for sure, but they were nice moves not just thuggy or boning down on next to nothing. Steep but you had to be good with feet too. However they felt much harder than they used to. Time to get some bouldering in i think.

I'd definitely go back with over 360 routes, 320 days of sunshine, views over the sea and the odd Ferrari to spot on the way there it's a nice place to be.

Unfortunately i forgot to take my camera, which is why you get a picture of me on my training board instead - doh !
Posted by Biscuit at 07:48 No comments: