Defeat from the jaws of victory

Rain stopped play at carrock on Monday night and a comedy of errors ensued. I was as sick as a parrot when we got there and it rained cats and dogs for 10 mins soaking everything. Johnny had left his harness in his car so Penrith was out. A quick trip to Keswick wall ? No, it shuts at 5 on a Monday. We ended up at Cockermouth wall at 8.30 for an hour or so.

I have started filming myself with my compact so i can see where i am going wrong/right and Mario has splashed the cash on an HD action cam thingy. Now that we're over seeing who can moon un-noticed at the camera it's a really good thing to do, though i have to admit i started it - the mooning not the filming. I have picked up so many little things that can make the difference between success and failure.

I had a re match with I Can, I Can't and Sing a Rainbow at Carrock mid week and they felt like totally different problems. I couldn't get the long balancy reach to the high good hold on ICIC but bounced nicely up to it this time sending it 3rd go. VERY sketchy top out though.

Similar story on Sing. I couldn't make the move to the sloper before i tore my pulley. I wasn't hoping for much this time as i certainly haven't been keeping 'strong'. I was therefore a bit shocked to discover i got to it first time and fired up to the arete before cutting loose and swinging off. It suddenly seemed possible and i was psyched, especially as Johnny got it soon after. I went for a big attempt with a new foot placement to help with the swing and before i knew it i was on the arete and had held the swing. En le bolsa !

Unless of course i was to revert to type and start fannying about, get scared because i was a bit high and generally forget any kind of sequence. I then got so tired i couldn't move and fell off. What a knob !

That whacked me out and it was getting dark so i didn't wait long enough to recover. A couple of further goes saw diminishing returns so i sacked it and went to look at a project for Johnny.

Why do i do this to myself ? It's something i am very aware of now ( fluffing top outs ) and will work hard on. I keep snatching defeat from the jaws of victory and it's got to bloody stop.
Posted by Biscuit at 05:28 No comments:

He must be really focused to ignore a dog as cute as Alfie !

Well it's been a while and quite a bit has happened really.

I've been mad busy with work, DIY, family and planning for the move to Spain. Mrs Biscuit has been very generous with her time though and let me out to play a good few times. 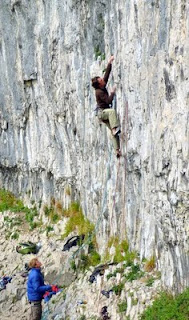 I even managed a day out in Yorkshire. Ended up at Malham ( predictably ) and had a terrible time there as usual. I couldn't even get up Puddlejumper, Consenting, Another dead end job and Hartley Hare on a top rope. Didn't do any leading ( definite head problem here ) and couldn't put any sequences together. I felt like i was climbing through treacle. 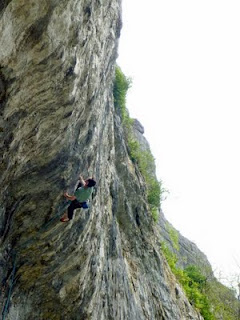 Caff on something 8b hard !
However all was not lost. Much inspiration was garnered from the people who were there. I was climbing with a group including Adam Hocking and James McHaffie, but also present were: Tim Emmet, Dave Pickford, Jordan & Naomi Buys and some bloke called Adam Ondra. It was just sooo good to see these guys performing. Ondra was great to see, but what a focused character he is. When he wasn't climbing he took himself off on his own and brooded. He didn't manage Overshadow that day but got it 2 days later. His physical ability is obviously matched with a laser like mental focus too. A truly special athlete.

My favourite though was Tim Emmet, who laughed his way up Unjustified while working it. He even found 2 hands off rests. He has such enthusiasm and obviously loves what he does. 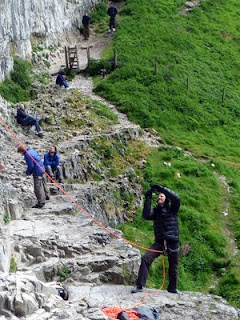 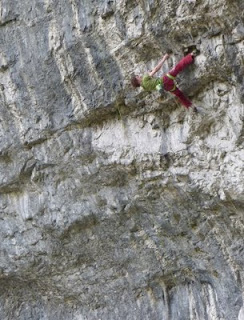 That day was the final nail in the coffin for my route ambitions in the UK though :0(
Due to work and travelling around to say goodbye to people i have got 1 free weekend day between now and the move. There is not much chance of me getting Comedy done in 1 visit (when i say not much i obviously mean none) so i have to be realistic. Without something to aim at it all feels a bit pointless, so i shall do some routes for fun but concentrate on bouldering.

This will mean i can work on the technique tips i got from John Kettle, monitor my finger a bit better, crack off those classics i want to do, get strong ( and better technique ) and then get fit in Spain for the 8a. I will still have 5 mths to get fit for it and i should be plenty strong enough. So a plan of sorts has come together.

I've finally started to pull hard again on my finger and whilst it remains a bit sore it is certainly not having any negative effects so far. I've been putting my new found enthusiasm for motivation into practice at the Bowderstone and the Crack now feels simple. Familiarity obviously helps, i've done it a few times now, but i am at least feeling brave enough to use momentum when i'm scared rather than reverting back to my standard static antics. It's really making a difference. 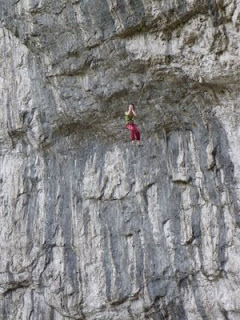 I had a dabble at Crack Superdirect and surprised myself by making quick progress. I then got stuck at the last hard move - that'll be the crux then. I was dynoing for the big pocket but was about as accurate as a muck spreader. I came back for a re-match a couple of days later but was still too tired to be honest. I really need to pay attention to recovery. I'm 35 now and don't bounce back like i used to. I keep breaking my promise to myself to get more sleep. It'll go next time and then it's time to start working Picnic again and Statstick.
Posted by Biscuit at 03:35 No comments:

That's what it said on his fleece anyway. It's a big statement in the climate prevailing in climbing at the moment - although to be fair he didn't have an ! after it. Big names are charging quite big money and i have spent my hard earned in the past going on a coaching holiday and having sessions with a couple of celebrities - but i didn't sell my story to the NOTW.
These coaches trade off their ( hard earned ) reputation as elite climbers operating in the grades we aspire to. My personal experience is that you get a definite rise in motivation and ability during, and for a short while after, but normal service soon resumes. The coaching holiday seems to be more about coaching you up routes. In fact i flashed my first 7a and got my first 7a+ 4th go. However i was effectively borrowing an elite climbers brain as he shouted:
" Left hand up, no not there higher. Now move your left leg out left and flag with your right. "
etc. all the way up. It got me up and i was dead chuffed but back home i went back to using my climbing brain and it somehow wasn't the same.
I think the message i've got is that coaching needs to be a continual thing. Not everyday but you need to find a coach you can build a relationship with and keep going back to for tune ups and pointers. If only there was someone local, affordable, jolly nice and most importantly bloody good ? Well if you live in the Lakes John Kettle may just be the man.
By his own admission he is not an 'elite' climber, though he does operate at a high level, but this shouldn't matter. Who's the better footballer Sir Alex Ferguson or Hernandez ? Who plays better tennis Nadal or his coach ? Who's hits the ball better Lee Westwood or his coach ? The answer is obvious in each case but they all trust their coaches with the most important aspects of their game. A coach needs to be a good coach not an elite player.
I met John at Kendal wall yesterday for a 2 hr session to make an assessment and start to work on me. First up i was impressed by his obvious passion for coaching technique. It turns out this is because he's been there and done that, all wrong. He got stronger and stronger to overcome bad technique and ending up needing a bolt in his shoulder. So time for a re-think and learn how to climb again - but properly this time.
Secondly i liked the structure of the session and his delivery. Nothing too technical and nice and easy for me to get the message and take away what i need to go and work on. He didn't destroy my confidence, but i get the feeling he could have done if he wanted to list all the faults he could see, but has sent me away to work on a couple of key areas that will see the biggest improvements for me.
I knew momentum was an issue for me but i didn't know i climbed one legged. Yes, that's what i thought as well but he'd already done the maths and you can't argue with stats that showed i drive up off one leg 66.6% of the time. The evidence is there to see in the pics on my last post. I've just looked at them again tonight and i have one leg dangling uselessly like erectile dysfunction at an orgy in all 3 of them. I had used 'The Self Coached Climber' and '9 out of 10 Climbers' and not understood it fully. The difference between someone who knows why it's right showing you for real, and explaining why it's good, and reading a 2D book is huge. How much have i spent on climbing books ? More than a session with John for sure. Doh !
Thirdly it was obvious to me he has an in depth knowledge of the subject and a good coaching style to get the message across. I have a degree in sports coaching so i'd like to think i know a good 'un from a bad 'un and John is certainly the former.
The proof is in the performance though and i went to Reecastle for a couple of hours on my way home. I skipped up Rack Direct, Finger Flake Finish and Gibbet Direct using both of those things on the end of my legs and some momentum at least. They felt so much easier than previously which is always a nice feeling. I know if i work on what John has given me i will be a better climber and i will be back to use him again once i've worked on my momentum for a while.
Pay £500 for a coaching holiday and a short term improvement. Nice.
Pay for a few sessions with John and possibly a life time of better climbing. Priceless.
Posted by Biscuit at 14:08 No comments: