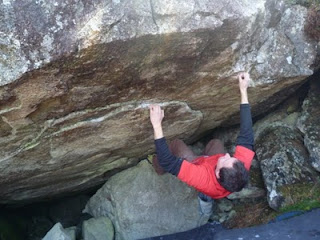 Badger Attack 7A
If you don't set ambitious targets you won't improve to your potential. If your targets are ambitious you will sometimes fail. Today i failed but this week has had so much learning in it it will stand me in good stead for the future.

Last Thursday i got the 2nd 7a+ i need for my 7b pyramid. I climbed it in such a different way to Johnny it really got me thinking about what we take from the way other climb and what that means for how we climb.

Johnny flew up the route. Fast, decisive and so dynamic it was almost wild. He never stopped.

I climbed it in a very different style. I don't have his strength to dyno those moves, catch them and then move off them. I was quite pleased with my send. I had looked at the way Johnny climbed it and knew i couldn't do it like that, but what if that was 'the way' to climb it ? I got on and tried to do it my way - static. To my surprise the crux moves went OK. Being truly static can be harder with no advantage of momentum but this was smooth and flowed nicely. The route went down next go. HOWEVER i need to get more momentum in my climbing. Not just when i know it's coming, like the dyno at the finish of it, but throughout all my movements.

Round at Pete's last night on his board we ended up discussing relative strengths and weaknesses. I mentioned that as part of my fingerboard warm up i do 3 sets of 10 pull ups. " Blimey ! " said Pete ( yes he really did say blimey we talk like oop North ) i can't even do 10 pull ups. I was a bit surprised to say the least. I know that cranking out 1000 pull ups doesn't mean you will be a good climber but i expected Pete to pull a few more than that off.

I then saw him trying a one arm dead hang. I couldn't do that but we discussed one arming and how to train as going from two arm to one arm is too big a jump. He tried a one arm lock off and couldn't do it. I've always been hampered by my door frame at home so was interested to see if i could. I COULD ! Only for 3 or 4 secs but it was there. I could do it left handed as well. He was saying how core was a weakness for him as well so how come he can hold on when i fly off the board ?

He's bloody good with his feet/body position and has fingers of steel. Simple.

Today i went out with Pete to Carrock fell. Beautiful day, great conditions, no excuses available :0)

We climbed with a friend of his from Uni called Ali. Ali is a keen climber but doesn't really boulder. She was great to watch ( no, not for that reason ) as she was soooo good. She was very static, but it was a strength not a problem. Her footwork was spot on and accurate and she really focused and gave it 100% despite a couple of bad falls. She floated up Boardman's arete, right hand, making up a new sequence in the process, and even more impressively did Rouse's Wall in her effortless static style. I was even more impressed when she got 'I can I can't', a notoriously puzzling problem with a scary feel, really quickly. I can't by the way :0( I bottled it a bit really.

So how can static be so good ? She just seemed to have the awareness of her body positioning to put it into the exact balance position it needed to be to enable the next hold to be reached. Her movement was very economical and graceful too. She seemed to float between holds. There was a definite lack of power screaming and no energy wasted slapping for distant holds or flailing about for foot holds.

So i reckon i need ( in order of importance ) :
So I have failed to get my 7A target by the end of Feb. I have only had 2 bouldering sessions this year outside and in one of them i didn't even attempt a 7A so i am not too worrried. Sing a rainbow didn't go at all today and feels a long way off. The crux move feels impossible at the moment. Hanging off 2 1/4 pad crimps, one positive and one not, on the underside of a prow, to slap up for a sloper using the poor crimp. As soon as i move i drop off the crimp. FINGERS !

On the plus side the amount i've learnt just in the last week about climbing movement and styles will have me on the road to success if i apply it properly. I also know a 7A that will go - badger attack. I only had literally 10 mins to get on it before i had to go and get my daughter. I gave it 3 good goes in that time and fell off the final mantel. Just need to get to it fresh - it is soft though. It must be as Pete flashed it with a quality mantelshelf finish move. 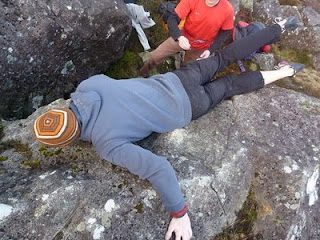 I reckon he used his knees !
Oh and i got Rouse's Wall as well. Happy with that. That's progress that is.
Posted by Biscuit at 10:12