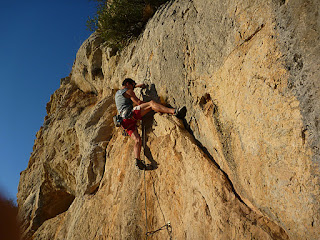 A 6a + at Yugoslavia
Easy bimble into a 6B. That was a shock.
Well things finally seem to be coming together. Like buses i was waiting for ages and now two have come along at once. My friends in El Chorro want to climb every Monday and our Spanish friend Sylvia has finally come back from her travels and also wants to climb as much as possible. 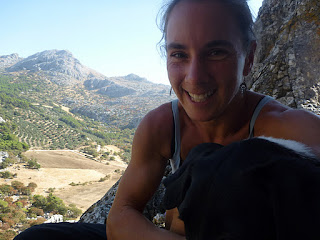 A pic of Sylvia for Mario's benefit
So i have been out climbing sport 3 times in the last 10 days and it feels great. One false start at a recently developed crag in Chorro ( think grades at least 1 full grade lower than they really are, long run outs above bolts while you do the crux and a 40 min walk in up a steep hill in the blazing sun). I guess this is often the result of ideas formed in the pub the night before with a hand drawn topo copied from another hand drawn topo.
Besides that it has been just what i came here for: Quality routes, great weather, road side crags, no queues for the starred routes, great people and beautiful places. Awesome.
Cut a long story short 6b+'s are going down easy and i on-sighted a 6c yesterday at Villanueva Del Cauche. It went like a dream with everything feeling how i expected and i got to the top feeling fresh.

Last year in Kalymnos i was wobbling up 6c's and i had spent a lot of time working PE. This year i have done none but am a lot stronger. Every move feels easier and i am not getting pumped. I am also able to attack cruxes more positively as i know i am strong enough to pull them off. 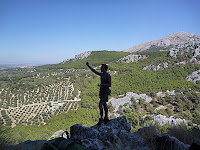 Me dancing on a rock.
I was visualising a route but Sylvia thought it was hilarious.
Although my climbing hasn't been regular since i got here i am in a rhythm with my climbing and am not feeling nervous about going above bolts like i was before. I am hoping it can only get better. 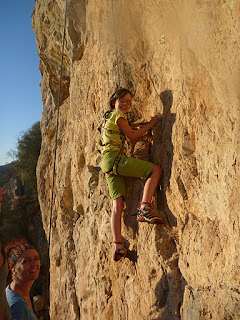