Things are slowly coming together 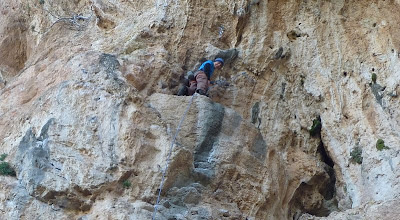 Another 7a on-sight failed. I still smiled when i got it 2nd go though.

Well it's been another 2 months since my last post. I can't follow blogs where people waffle on about every time they go out or what they had for lunch. I haven't made any massive leaps in progress, no eart shattering news, but i thought that what has been happening was worth a summary post.

I kept on trying for the 7a onsight and so far have kept on failing. Everytime i am so close. I am into double figures now. It has either been just one mistake or my head that has been stopping me. How i react to that mistake, and deal with the subsequent fear of falling, is what is stopping me.

I am now resolved to take some falls every routes session and if i don't then you can call me soft ! It's still a massive issue i need to overcome. Because it's a massive issue i am hoping to make some big gains in performance.

This has come to a head due to my new climbing partner(s). As the season is coming to an end a lot of people have left the Olive Branch and i have also started the search for work. I know it's tough but i haven't done a days work since July 2011 so i need to get back to it. 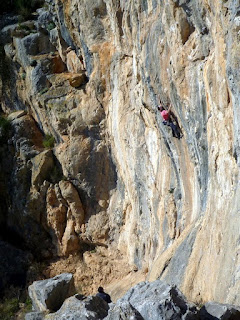 This led me to get in touch with the rockclimbingcompany and Silvi Fitzpatrick. Not only did she think that we could work together she also wanted to climb together. Feeling nervous i went out with her for the first time climbing at the Chilam Balam cave. I was bricking myself but ended up pleasantly surprised at the amenable grades that were there as well as 9a+(b) madness.

I ended up getting a real introduction into what it takes to climb hard grades. A never ending passion for giving it 100% seems to be what it takes. You can't fail to be carried along by Silvi's enthusiasm for climbing. One second she is laughing, the next deadly serious. It's obvious climbing is what makes her tick, a real obsession. She enjoys it, but it's not to be taken lightly. If it's worth doing then it's worth devoting your entire life to see where it takes you seems to be her motto. 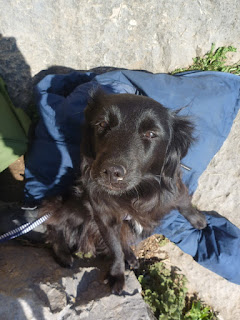 The new love of my life, Ciara the worlds greatest crag dog

Due to some old injuries she has had to change her climbing style and is now a bit of a technical master ( mistress ?). Climbing with her is like having your own personal coach. She's great to watch and also knows when to chip in with advice when i am struggling. She has a massive amount of experience and i am going to learn everything i can from her. On top of all that she's really nice too. 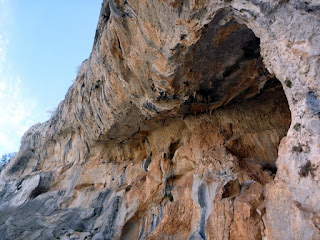 The amazing line of Chilam Balam
One thing i've noticed, other than how strong her fingers are, is how much she moves her body position about. I tend to grab a hold, stay static and try to figure then next move out. I just about always start the next move from the position i am in. Silvi is never still. She milks every position for what she can get out of it and will get a hold in one position, move into a restful position, figure the next move out and then move to the optimum position to execute the next move. It's not done as statically as i describe it. It flows beautifully from one move to the next. 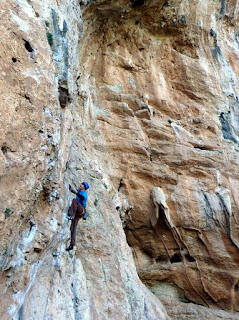 She also climbs much more side on. I remember AJM from fit club saying he had had a coaching session with Adrian Berry who pointed out that he didn't climb as side on as he should. I always thought that was a bit odd as it's obvious that when it's steep you turn side on. However watching Silvi she is rarely front on to anything. She sits on her feet when outside edging keeping her arms dead straight and pushes her way up routes with her legs.

I should now get the opportunity to get back on harder routes. I've been on a handful of 7a+'s and 7b's but never had chance to go back after an initial feel of the moves. I've now got a couple of projects, including a 7c monster that i will be able to get back on and give them a real go. It'll be good to see where my limit is. Silvi reckons a 7b will go next time for me ( now she has shown me how to clinb it with technique ) and with a bit of work there is a 7b+ waiting for me. I just have to believe her.

Me climbing face on - again 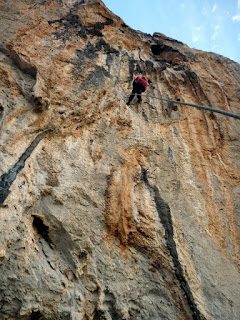 The project ! Cenizo 7c
It's a bit steep.