Well it's been nearly 6 mths to the day without a blog. Basically it's gone like this:
Taking these one at a time.

Lack of psyche was confusing to me, until recently. I'd just broken a new grade and physically it didn't feel that hard. Mentally however was another story. Being scared to death of falling and trying to climb as hard as i thought i could meant i was likely to fall. I just wasn't enjoying the process. It was only recently that i acknowledged that this happened when chatting to Steve at Loja. We talked about how he is scared of falling on on-sight and i am scared of falling on red-point. Steve is a red-point machine and brilliant to watch. He sorts out sequences very quickly, focuses and goes 100% on his attempts. This often gets results. I get more scared on red-point because i am much more likely to fall. I then hesitate, get tired and fail. The whole build up to it and mental pressure was just not floating my boat at the time.

I took the chance to go to physio for my elbows and whilst she didn't say stop climbing i was told to keep it at a low level for a while or she might have to repeat the really painful massage she had done on me. 'Nuff said and i was a good boy. What i found helped a lot were all the little things you do that aggravate it. I changed how i belayed in particular ( straight brake arm and no tension in it ), how i drove, how i carried my rucksack and loads of other little things that were stopping it recovering fully. It hasn't come back so fingers crossed.

Summer was just hot and everyone went away on road trips and left me partner less and sweaty, so not much done there.

The broken ribs was one of those things i couldn't do much about. A bit silly really but i got involved in a bar fight in a friend's bar. I grabbed the big fat fella who was causing all the grief and took him down to the ground from behind in true ex policeman style. Unfortunately i was a slightly drunk ex policeman and got it a bit wrong and he ended up falling on top of me and we hit the corner of a table on the way down. To add insult to injury i got whacked around the head with an ashtray that someone was trying to hit someone else with. Owch ! It wasn't all that bad after. I am sure i cracked a couple of ribs under my right armpit and did something round the back near my shoulder blade but it could have been worse. You should have seen the other guy :0) After a month i was able to pull hard again, but it still hurts when i sneeze.

After all this i was ready for trying again. Steve and his friend Paul were coming over for a week and Steve wanted to try Hasta Luego Luca again. It's an amazing twin tufa pipe climb with consecutive knee bars, and Steve had bought a 5.10 knee pad. Despite the fact that it has been universally agreed that this bit of kit takes off half a grade i still failed on it due, yes you guessed it, being scared of falling. I was too hesitant and slow. Steve cracked it off in good style. 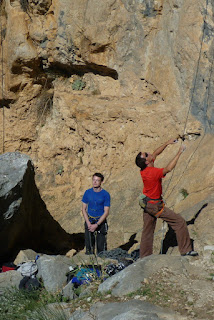 Me really dancing while Steve basks like a lizard

We met up again a couple of days later at Cauche where a weird thing happened. Paul was trying Tomohawk, the very same 7b i climbed 6 mths ago that put me off. I got back on and sorted the low down boulder problem ( ish there was still 2 possible sequences for the boulder problem ) and flashed the rest. After a short break i tied on, climbed it decisively ( using the new sequence but going at it 100% ) and cruised it. I had not done anything different in my approach, i had no 'pre-flight' nerves, no fear of falling, just a feeling that it was going to be OK. I have absolutely no idea what happened. All i can say is that if that is how it feels for everyone else then i want more. I have started to worry though as i had not done anything to lose the fear, it could easily come back. 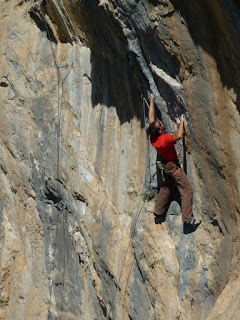 Getting to the steep bit 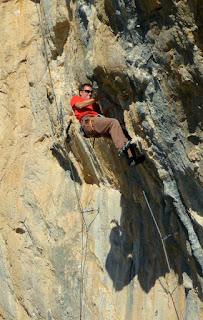 The crux is slapping for a blind edge over your head from the slopey undercut. 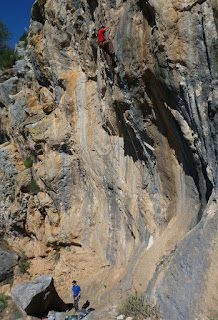 Crux done, just the easy ground to mess up on now 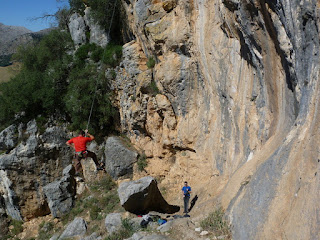 Victory swing
Posted by Biscuit at 15:00