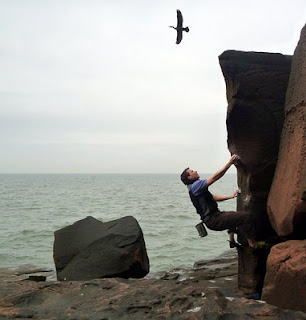 Me and a friend on a V3 arete. I couldn't get my lardy arse off the ground last Summer. Crushed it first go this time :0)

St Bees is definitely winning at the moment. After dropping my camera in a rock pool there a couple of weeks ago ( 1-0) i actually dropped my rockshoes in the sea the other day ( 2-0) after slipping on the slimy stuff whilst carrying my kit round a boulder near the edge. Glad it wasn't me that went over and that it was my old comfy shoes. I was trying to fish one back from where it had fallen tantalisingly close on a ledge until i saw my other one bobbing past in the sea. I now have a new camera and was able to take a photo to commemorate my stupidity. 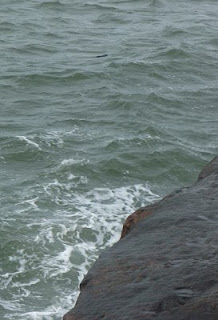 If anyone finds a left anasazi verde on the Isle of Man it's mine
So that was 2-0 and 3-0 soon followed when i was trying the 7A arete at Fisherman's steps. It's supposed to be 'very morpho' and i don't have the morph for it obviously. All sorts of contortions ended with me coming up with a dyno solution. I reckon if you can't use the small holds in between miss them out. I must have been into nearly 3 figures of jumps and still with no success so i scuttled off back home feeling pissed off i wasn't going to get my goal of a 7A and a 7a before the end of April. I am going to get it though. Core and finger strength are needed in abundance.

The weather looked as though it was just holding the next day and although i was feeling a bit sore from the previous days exertions a couple of texts revealed that Chris was going down that evening to do some bolting. He offered to belay me on Dreaming of Red Rocks after he'd finished - very nice of him i thought.

When i got down there i planned on bouldering for a while to warm up then hit the route. However i spied a 7A i laughingly tried last year. I could only do it with a cheating rest half way round and even then it was the pumpiest traverse i'd ever seen. I played on it for a few minutes and this time round it felt possible. Less than an hour later it was in the bag. My new HD video camera let me down big time by hitting a technical glitch and failing to record my glory. Attempting to do it again were useless as i gave it all on the send. No matter, the point was at least i'd got it done. It felt so different to last year. I found 2 rests on it this time that i couldn't use last year and the crux moves were hard but the pumpy traverse that followed felt pedestrian.

3 - 1 !
I'm glad i've come out with something this month as it's been a bit crap to say the least. After being poorly i don't seem to have got a routine back and my diet has gone to pot. Got El Chorro to focus on in 6 weeks though so back to it now with no more excuses.

I want to do Poema De Roca:

which is the pumpiest 7a in the world ( possibly ) so training for Dreaming, which is a 7a+ pump fest won't do any harm. I'm not sure where this willingness to do pumpy routes has come from, i used to hate them. If i can RP Dreaming before El Chorro i'll be laughing.

Dieting ( again), finger boarding ( once my fingers are better ), core work and circuits are going to come into play. Be interesting to see this time round what i've learnt training wise from my previous mistakes.
Posted by Biscuit at 12:10