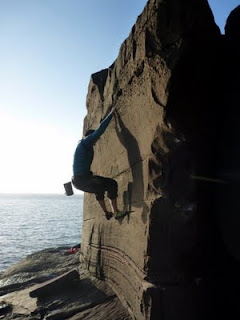 Not the problem i was working but another one that looked OK in a photo
Had my first, very, belated session of Anaerobic Capacity training yesterday. I was partnerless due to a party in Borrowdale, snowboarding, Corsica and Yorkshire. Long story. Anyway i headed down to a surprisingly busy Bees ( raised profile from Planet Fear debacle ? ) and had an awesome time playing about on many low grade problems i know well. I realised i was actually running from problem to problem like a small child let loose in a sweet shop. So many problems, so little time. I felt so good. My feet were going just where i wanted them, i could do strong, my timing was there and mantleshelves felt piss - and that doesn't happen often. Climbing is such a happy place to be when it feels good.
I met this guy as well:
http://www.lwimages.co.uk/
who seems a genuinely nice bloke, which counts for a lot in my opinion. Always great to meet people who have a real passion in any field.
I soon got down to business though and started the first of 10 reps on a 10 move (ish) V4 traverse with 5 mins rest. It's a slappy, campussy affair with some footless moves followed by poor slopers with poor feet.
The only word to describe AnCap training is INTENSE. I now know what it's working - power fade. Those times where you're not pumped but you just can't make another move even if it led to fame and glory. I failed on the crux on the 10th rep so i've got the level guessed correctly first time, which was nice.
It felt OK at the time but today my forearms know they were busy yesterday. Bit of a rest and then back to it. At least twice a week i think.
I've also re-jigged my other training. I just haven't got the ability to train after work. I get back, have tea, spend time with the kids, put them to bed, get jobs done and finally settle about 9. If i then said to Emma i am off to do an hours training she'd ( quite rightly ) go nuts. So early mornings are the way ahead. I was up bright and early today and managed a 1/2 hr run with the dog, 240 core movements, 10 ab wheel rolls ( on knees ), 10 front lever extended tucks and 3 sets of the infamous bolton dumbell complexes before the kids got up. What a way to start the day. I think i could actually get into it.
Onwards and upwards !
Posted by Biscuit at 13:54