Enough success it's time for some hard work 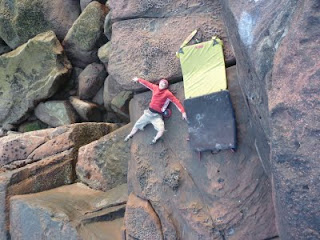 Mario testing the landing zone
The ticklist has been going well with only one rain interrupted session missed. That meant i didn't get to the Bowderstone to do Crack Superdirect but I went to Kewick wall instead and had a play there. I've never got on with the place really but their board could be worth the entrance fee. I ended up having a session on that as Adam Hocking was in, having also been rained off, and was monkeying around on it.
I managed to repeat a couple of problems he was doing easily - positive wad points :0) Then he did a mad cross through manoeuvre followed by a shoulder press that nearly prolapsed my shoulder girdle, if that's possible. It's brilliant to see someone with such power under such control. He was on a warm down btw and says that though he's route fit at the moment he's not on top bouldering form. At this point i lost all accrued wad points and received a big kick up the arse motivation wise as i realised how far i have to go just to get to 7B.
I managed 2 sessions on the board this week and 4 in all. Most finger intense week i've had for a long time and my fingers feel good Only one session outside, at St Bees, where i ticked Hueco Crack ( Low Start ) 6C+/7A. I also did a line i must have walked past a hundred times and had never noticed. It's not hard but has some nice moves and holds on it and is worth doing. It must have been done before as it is obvious once you 'see' it. Mario modelled the landing for the camera and it's potentially dodgy as the line is the closest to the drop into the sea/rocks below.

It's been great having all this success of late and it's set me off on a positive track that i've been de railed from for quite some time. However i need to get cracking now and be prepared for some hard work. Other than a coaching session this week i am having a few days off and i'm then going to launch an all out attack on the Bowderstone. Crack Superdirect has to go quick and i'd like Statstick in the same session. Then it's time to see how much progress has really been made with a re-match on Picnic.
Posted by Biscuit at 13:50