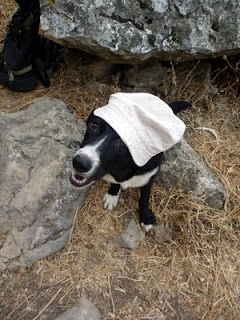 With afternoon temps hitting 46 celsius early ( ish ) visits to the crag were in order and even Alfie had to wear his sun hat. 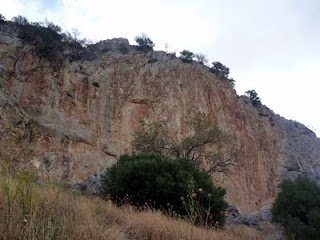 While Mario was over a great time was had visiting a couple of local crags and getting some mileage in. This is my local crag - Villanueva de Cauche, or Sector Yugoslavia. About 50 odd routes all told from 5 to 8b. Plenty to be going at and despite what it says in rock fax even in August it was climbable into the afternoon. 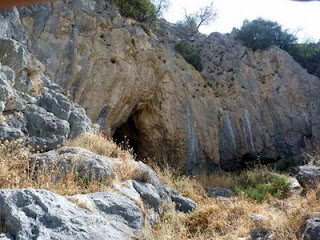 The upper cave shown hereis being developed as a dry tooling area. There doesn't seem to be the same ethic stance here - more of which later actually. However there is an awesome looking 5 pitch HVS/E1 round the corner, but that was too sunny to try this time. 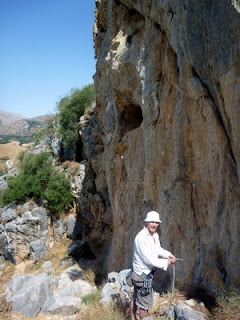 At one point it got so hot Mario had to borrow Alfie's hat.
I started the week in an awful way with no head for roped climbing at all and certainly no route reading ability. A few months of bouldering working hard, steep lines left me very un prepared for on-sighting steep slabs and vertical lines. Quite obvious really but it came as a shock to me how poor i was. I hit rock bottom having to cry take on a 5+ and that gave me the impetus to get my arse in gear. By the end i was much happier above bolts but still very hesitant. I wasn't getting pumped but taking ages to make decisions. Anyway a very quick 6c redpoint ( 1 top rope the day before and then led first time the next day ) gave me some confidence and some 6b+ on-sights followed.
I started to get a bit poorly after that with a chesty cough and feeling weak. Air con is the culprit and it took a week to feel well again.
Still need to find some partners.
Posted by Biscuit at 06:55