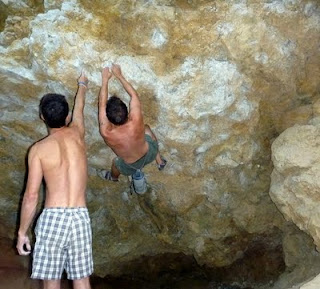 Is a bouldering area just outside Malaga. It's described as steep and thuggy and it does what it says in the tin. There are 2 small caves, one of which has routes coming out of it, and the other has been dug down to provide more height and steepness.
I was remarking to the guy you can see in the pic above that the one vertical wall was chipped all over the place. He replied it was, some by him, and that it was 'only for training' so it didn't matter. I guess they have that much climbable rock it doesn't matter as much to them. 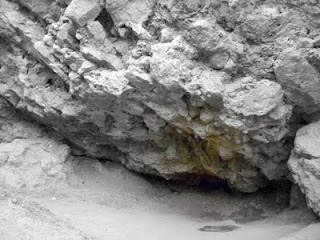 This is a pic of the dug out cave. The coloured section of the photo shows a newly constructed tufa. It was still wet, as i found out when i stuck my finger in it and got shouted at. How to make new friends eh ?
Lower down there are stuck on pebbles, old wall holds and all sorts of shennanigans going on. Again they see it as a training area so you can always eliminate the fake stuff to make it harder as you progress i guess.
I had a really nice evening climbing with the 3 guys there and got invited back again next week - nice of them as i didn't realise it was their crag ;0) I have to take my harness and do the 7a+ mad steep route in the right cave supposedly. 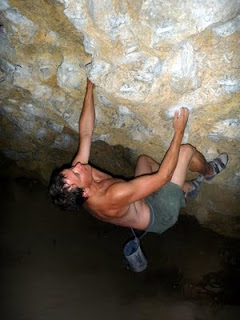 Showing off my 'farmers tan'. Brown arms and calves, white everywhere else.
WHAT A SHIT HEAP ! 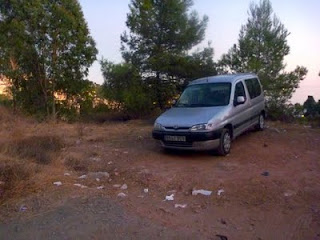 No not my van, that's Santiago btw my trusty Spanish banger, but all the turds that were all around the parking spot. FFS why do people do it. I can vouch for the fact that all the Spanish houses i've been in have flushing toilets. There is even a garage with toilets where you come off the main road for this place so why do they crap in the car park ? I find this at a lot of Spanish crags and the worst thing is having to pull shitty toilet paper out of Alfie's mouth as he loves the stuff.
On a happier note i am off on the hunt tomorrow morning to find some other boulders i have been told about. Supposed to be over 600 problems at this spot. Just got to find it. That'll mean i have places to go. Torcalits is awesome for fitness with lots of traverses, up and down probs and good for burl. the other spot should sort out technique and variety. Now i just need to get a partner or 3.
This weekend should bear fruit in that direction as i put a plan in action. Failing that i'll bug the guys at Torcalita.
Posted by Biscuit at 07:12