Lard of the pies !

Nice day out today with Rob aka Jeff from UKB. After a failed meet earlier in the week we finally got together before the predicted bad weather tomorrow. Rob's up here for his 'baby moon'. A new concept to me but it's basically have a little holiday before the baby arrives and ruins your life for the forseeable future.

Rob had got out a few times during the week while his heavily pregnant non climbing wife was abandoned in various strange towns ( even Whitehaven poor girl ) to look round or stayed at the hotel. I think i know who's had the most fun on their babymoon.

Went to Eskdale granite at Fisherground. I'd forgotten how rough that stuff is. Lasted about 3 hrs before my skin gave up and the rain started coming in down the valley. 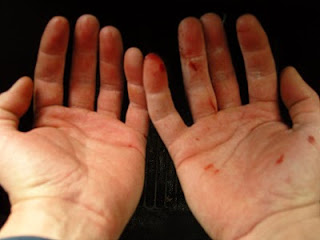 Nice flapper on my pinkie, which is going to take some time to heal, and my fingertips were seeping blood through the skin.

Had a great time though and did some classics:

as well as problems up to V4. Quite pleasing really and got them 2nd or 3rd go. I also on-sighted a V3 and got a couple of pumpy lip traverses done:

What have i learnt from today ?


Biggest lesson of the day is that it is possible to drive past Gosforth pie shop without stopping off for a chicken and mushroom with a scotch egg for pudding. It was close though ;0)
Posted by Biscuit at 05:57