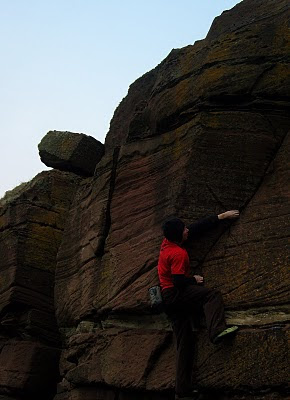 This blog and my ambitions are all about the journey; getting from where i am to the mythical heights of Fr8a - though apparently 8b is this years 8a but I'll cross that bridge when I come to it.

It's not all going to be positive progress and when you seem to be heading in the wrong direction you need to look at the map and not just listen to the sat nav everyone else is following.

One thing that does help is writing things down. It makes you think about what you're doing right and wrong and to spot trends. I had a crap session at Kendal on Sunday. Picked 3 new targets: 7a slab, short overhanging 7a and a 6c+ on the big wall, but nothing of note happened. I got close on the two 7a's and they should go soon, which feels good, but my arms felt empty on the day. I could crimp on the slabs but any steep ground just pumped me out.

Same has happened today. A bit of a hopeful trip to St Bee's South saw damp conditions and a lack of zip put paid to my aspirations of the V4 extension to Red Whale, a V3 dyno ( Bottomless arete ) and Godzilla, an awesome highball V4 arete.

I did lots of lower grade problems, and on-sighted a fantastic V2, Calico Jack, so the day wasn't a waste by any means but i felt so much stronger and more precise last week at Eskdale. Any kind of longer problems really made me fight the burn.

Definitely more me than the conditions to blame - i could even mention my really thin skin from last week as an excuse, but i won't. A good think on the way back to the car led to the revelation that climbing 3 times a week, running 3 times a week and a fat loss diet at the same time isn't a good combo. Time for a look at my map.

Fat loss is still the major priority so the diet + running stay. Guess I need to head for quality not quantity in the climbing. But fitness or strength, or somewhere in between ?

Just ordered Dave Mac's new training book so maybe he will have the answers. I think i know what i need to do but i'm going to ponder over the next few days.

On a happier note the big fat loss plan is going OK. I've got leaner but heavier. Body fat is down from 24.9% to 23.5% in a week with a corresponding increase in muscle. Result ! I am however 1/2 kg heavier. Go figure. Not too fussed about the weight but as long as the lard is being stripped I'm happy.

Got a weekend away from home and the kids coming up. Booked in a hotel with full fry up breakfasts and 3 course dinner already paid for. Am i going to get my money's worth and try to eat my own weight in sausage + bacon like i normally would ? Can i partake in a pub lunch without a real ale or 4 ? Am i going to take a pair of trainers for a quick morning jog or will the planned excess intake of port destroy my resolve ?

This could be the first big test of how much i want that 8a.
Posted by Biscuit at 07:48