These excellent Winter conditions everyone has been harping on about have so far eluded me. Banned from having any fun over the Xmas hols by Mrs Biscuit and then kids off school due to the weather. Bah !

Finally got the chance today. I fancied a nice easy solo to start the year and was considering Trough Gully, Newlands Hause or something on Brown Cove Crags. As it turned out i went to Buttermere Sourmilk Ghyll after a tip off it was in mint condition. I've never done it before, it's easy, bloody long and 3*. Result. The tiny walk in meant i coud fit it in and do some DIY to get more brownie points :0)

Crampons on almost as soon as i got out of the car ( I'm sure i saw DR Hilary Jones practising on it ) had my hopes up. But was the noise i could hear the wind or the Ghyll ? Both as it turned out. Winds gusting about 50 mph on the tops and take a look at the 'mint' conditions: 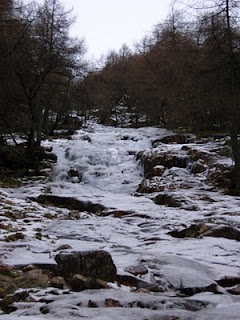 Doesn't look too bad from there does it ? Have a look here then: 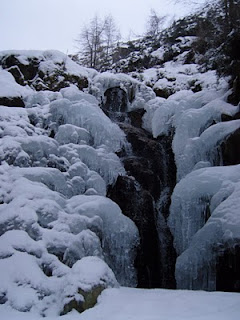 On Saturday that ice met in the middle and was fatter than - well me at the moment i guess.

Not sure if i made the right decision but i ploughed on anyway. I'm still here so i guess it wasn't a bad decision. Good practice was had at pecking thin ice, clearing poor ice and delicately dancing my way up rotten ice. Lots of good soft plastic ice around though if you could find it. I soon stopped banging and hacking away and started thinking about what i was doing. I even got a little mixed in higher up. In fact conditions got worse higher up and the walk down was a nightmare of powder and spindrift.

Think i'll wait until the next freeze before i venture out again.

Better than doing the wallpapering though and it'll have burnt off a bit more podge so not all bad. 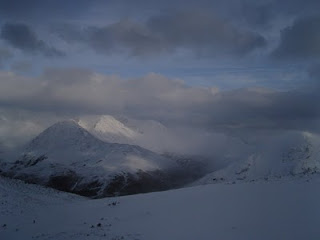